From the pages of the No Worries Paris guidebook: “The restaurants and bistros amplify on Rue de la Roquette. But in the 17C, Roquette was but a rural road leading to the large domain of a convent of the same name—which derives from a pale yellow flower, “the rocket,” that thrived in the rubble beside the road. At the time of the Revolution and for a century thereafter, Roquette was known as the “Sinister Way,” or “Sorrowful Road.” It connected the prison at Bastille to the new cemetery at Pere Lachaise, passing two other prisons, both a men’s and women’s. Funerals and bawdy public executions by guillotine were frequent. To your right as you reach the Roquette, at #76, is Theatre de La Bastille, where the quarter’s new vibe is apparent in dance and drama performances that warp and create trends.” 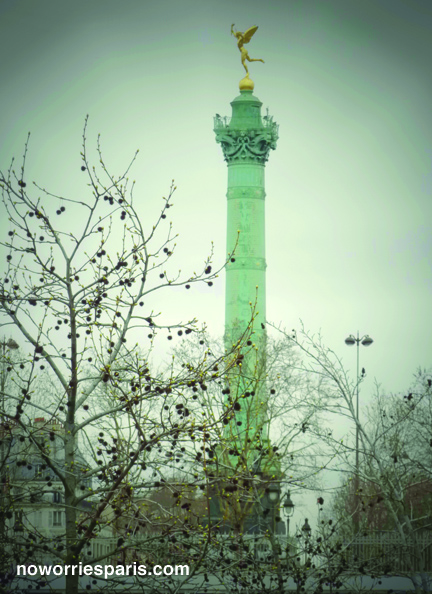 A lively sidewalk scene is guaranteed at Place de la Bastille, but the only reminder of the infamous prison is a 160-foot bronze column, the Colonne de Juilliet. The spire was erected 31 years after the Revolution, to commemorate the Revolution of 1830—when the reign of Charles X ended and the advent of France’s “citizen-king” Louis-Philippe began. Names of the some 500 people who died in the revolution are etched in the bronze. Atop the column is a 16-foot gilded figure, “The Spirit of Freedom,” looking sprite, balanced on one foot, winged, and holding a torch. Hundreds of people are buried beneath the column, from the 1830 revolution and from yet another uprising in 1848. Mostly traffic storms it now. Watch it crossing on bicycle or on foot.