Normally admission to the Hotel de Ville is by guided tour only.  But, once a year, Paris’s mayor opens the doors to the public on Heritage Days. This year I was lucky enough to spend three hours at City Hall wandering the halls dazzled by the crystal chandeliers, stained glass, sculptures, paintings, elaborate ceilings framed in gold, adorned with pink cherubs, winged horses, historic insignias, French portraits. 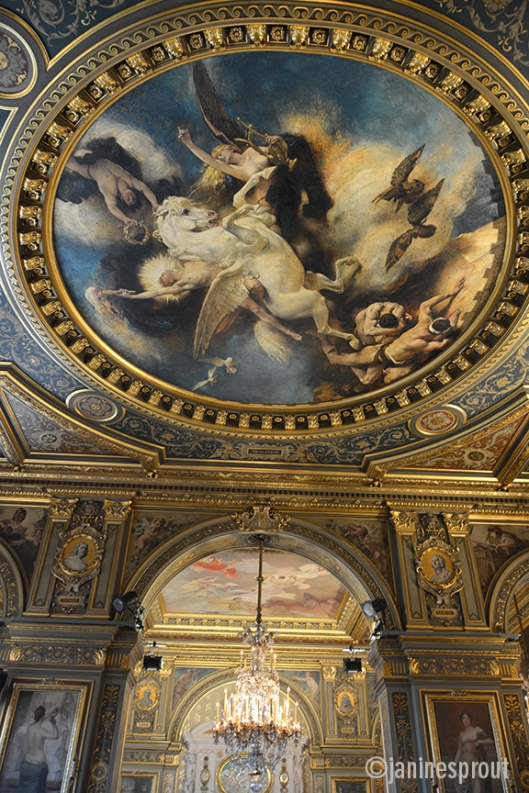 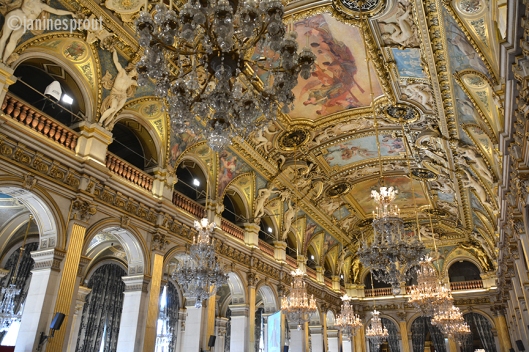 The library and council room were open for inspection. Many works from the collections of the Municipal Contemporary Art Fund added a visual twist in many of the salons and governmental offices. In the back of my mind was the fact that the inside of the building was totally destroyed by fire during the 1871 revolution. It took 19 years to reconstruct and furnish this treasure.  Make it to next year’s open house or schedule a guided tour.

The Protocol Department organizes free visits of the Hôtel de Ville‘s Reception Rooms, with commentary, from Monday to Friday.

For individuals a weekly visit is available in French (two weekly in summer). Groups can accommodate 30 people max. The dates and times are fixed on the Thursday preceding the visit.

Access for visits is at 5 Rue Lobau (4th), at the back of the building.
Metro: Hôtel de Ville.

A little history about the elaborate building:

Ever since 1357, the City of Paris’s administration has been located at the same location where the Hôtel de Ville stands today.

1533: King Francis I decided to endow the city with a city hall which would be worthy of Paris, then the largest city of Europe. Building work was not finished until 1628 during the reign of Louis XIII.

1835: on the initiative of Rambuteau, préfet of the Seine département, two wings were added to the main building and were linked to the facade by a gallery, to provide more space for the expanded city government.

1871: The Paris Commune chose the Hôtel de Ville as its headquarters, and as anti-Commune troops approached the building, Communards set fire to the Hotel destroying almost all extant public records from the French Revolutionary period. The blaze swallowed the building from the inside, leaving only an empty stone shell.

1873-1892: Reconstruction of the interior. Some 230 sculptors were commissioned to produce 338 individual figures of famous Parisians on each facade, along with lions and other sculptural features. Rodin produced the figure of the 18th-century mathematician Jean le Rond d’Alembert, finished in 1882