Blink going down the rue des Archives and you’ll miss the sign of this unstodgy private museum where you’ll trip the light fantastic. The ceiling of one room has been covered in owl feathers in a work called The Night of Diana, rooms have names such as Room of the Boar, Salon of the Dogs and Cabinet of the Wolf, an alcove is dedicated to unicorns and a collection of gold dog collars throughout the ages is displayed alongside 17th-century portraits of Louis XIV’s pets. A small white version of the Scottie dog sculpture Puppy by contemporary American ceramic artist Jeff Koons is also part of the mix.

The museum includes an array of weaponry from the 16th through to the 19th centuries, hundreds of trophies and taxidermied animals from Europe, Africa, Asia and America. These include a polar bear, lion, tiger, cheetah, fox, rhinoceros, bison, water buffalo and many birds. In the Room of Trophies, Le Souillot, a wall-mounted animatronic albino boar head by contemporary French artist Nicolas Darrot, speaks to museum visitors in French. There’s a hunting lodge coziness to the place where guards take pleasure in opening drawers filled with artifacts and children are given special attention.

It’s been characterized by the Smithsonian magazine as “one of the most rewarding and inventive in Paris.” To quote a visitor: “it all makes you think about hobbies, prestige, the meaning of life, nature, domination, death, social class, art and our relationship to animals and life around us. There is the amazing and the prosaic, jokes and tricks and strange juxtapositions of materials. The stuffed lions and disassembled owls are especially haunting. The gun that shoots around corners is one of the many jokes displayed alongside the rare the beautiful and the serious.”

Duck in some afternoon. The admission is around 6 euros and it’s closed on Mondays. The No Worries Paris guidebook has more for you to see a few doors down. 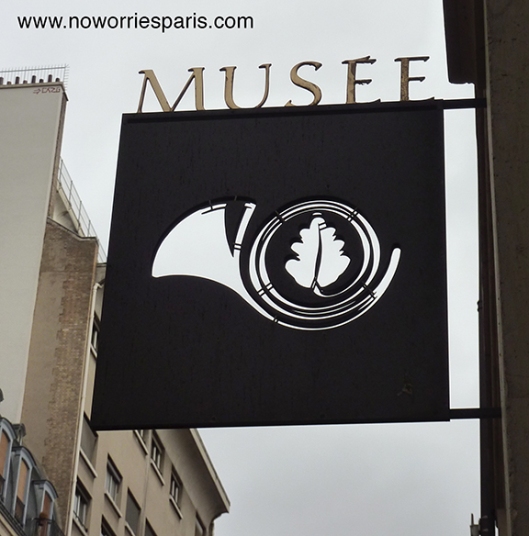