Situated in a corner of the Jardin des Plantes sits the Museum of Natural History. Walk up the front steps and time travel to the world of the Comte de Buffon. Buffon was one of the most important, famous, and widely read naturalists of the eighteenth century. His ambitions were far reaching seeking to describe and identify everything related to the earth: quadrupeds, birds, fish, and minerals.

Buffon worked at the service of King Louis XV as the director of the Royal Botanical Garden in Paris (now called Jardin des Plantes), where he compiled a rich collection of preserved and living plants and animals in the Kings Cabinet. The museum became one of the leading scientific institutes in the world during the second half of the eighteenth century.

Inspect the cases of specimens and handwritten labels. Marching skeletons of cheetahs, wolves, giraffes, whales, walruses, horses, rhinos, turtles, deer all sturdily articulated are there for your inspection, most over 100 years old.

There’s a modernized Hall of Evolution that’s pretty spectacular on another corner of the Jardin but I prefer this less slick display of bones and paper descriptions, dusty glass cases, fossils, filagree railings and squeakie wooden floors. I’m hoping it never changes. 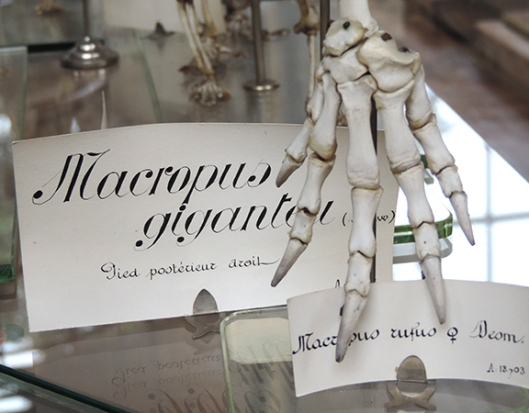